Interesting article describing the changes Atlantic Avenue has gone through over the years, and how the early settlers have influenced the culture in the neighborhood.

The early businesses that settled here from the start of the early to mid 1900’s are showcased, some of which are still there after all of those years! Among the featured businesses is Tripoli Restaurant which has been on Atlantic Avenue since 1972. The story shows the interesting journey that the oldest Middle Eastern shopping neighborhood has gone through and is continuing to go through. 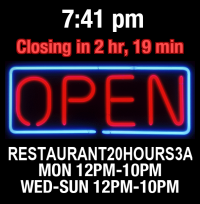 Open for Take-out and delivery only.

We understand that your personal privacy is one of your biggest concerns and we are committed to protecting it. At Tripoli Restaurant, it is our policy not to distribute, sell, rent or in any way make available, your name, email address or any other personal information to any third party without your permission.